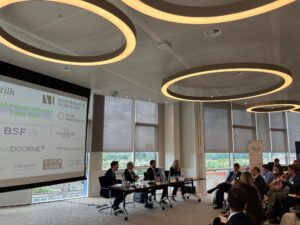 EFILA is a Brussels-based think tank, which was established in the summer of 2014.

As one of the founding fathers of EFILA, Nikos acts as its first Secretary General.

The purpose of EFILA is to provide a platform for a merit-based discussion on the benefits of investment treaty arbitration.

To this end, EFILA regularly organizes events and publishes in-depth studies on TTIP, CETA and the proposed investment court system (ICS). EFILA has been actively contributing to the debate on investment law and arbitration in Europe. EFILA also runs a widely-read EFILA blog.

The membership of EFILA is divers and encompasses lawyers, arbitrators, academics and companies. All members serve in their personal capacity.

Within its short period of existence, EFILA has been recognized by its peers as a unique, credible and knowledgeable institution. For example, EFILA has already been nominated twice by GAR: for the best development in 2014 and in 2015.

Moreover, the first EFILA Annual Lecture delivered by Sophie Nappert in 2015 won the GAR prize for the best lecture in 2015.

EFILA is the unique voice of the investment law & arbitration community